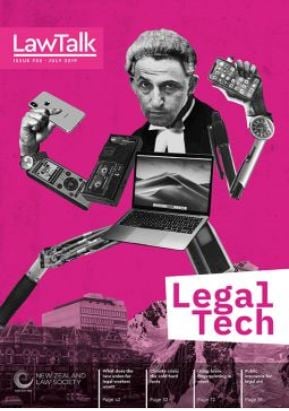 I was interviewed for LawTalk 930 on what LawHawk has been up to, and how we are going.

You can read the full article here, and below.

Back in 2016 LawHawk burst on to the New Zealand legal scene and has gone from strength to strength since.

“Legal tech is taking off around the world, as people see how technology has revolutionised other industries and professions and want to bring the same benefits to law,” founder Gene Turner says.

LawHawk specialises in helping other lawyers automate legal documents. It provides an end-to-end service – from helping to identify the opportunities; analysing and improving the underlying documents and processes; training; and providing the underlying technology via a secure cloud portal.

“We help our customers get the benefits of automation quickly and affordably, without doing it all themselves,” says Mr Turner.

He founded LawHawk with business partner Allen Li. Until 2014 Gene Turner was a partner at Buddle Findlay and at the time he was interested in having the IT team at Buddle Findlay develop the kind of software he now provides through LawHawk. He decided to learn how do it himself after several attempts from the IT staff at Buddle Findlay failed to produce exactly what he wanted.

“That’s not a criticism of their skills in other areas, but we’ve seen many times that it just isn’t possible for someone without legal training to automate complex legal processes – so I decided to learn the software, build a website and integrate the software, and offer a full managed service.”

LawHawk is doing well, although Mr Turner admits that the business is “just scratching the surface”.

Their key customers have worked with them to identify areas where automation can make a difference in their organisations. “The early work we have done with them has not only made for some substantial immediate improvements, but also opened the door to even more ambitious improvements to come, and we are seeing a lot more repeat work,” he says.

LawHawk has built up a base of intellectual property from other successful projects, which allows delivery of high quality solutions very quickly and with low risk. “In a number of cases we’ve successfully delivered projects in weeks after others have tried and failed over longer periods.”

Changes in the market

Since launching in 2016 there have been a number of other market entrants who have raised awareness of automation.

“Almost every ‘AI Chatbot’ that launches appears at its core to be another document automation tool. The challenge is helping customers work out what solution best meets their needs.”

Mr Turner says an important and exciting part of his work is not so much the technology itself but focusing on the people and processes. This determines the success of the project.

A lot of analysis is needed before automation and it requires an investment of time and thought as much as money to get real benefits. There is no point in automating a bad process. Technology can do all sorts of things.

“It’s knowing the right things to do, at the right times, that is key to getting good outcomes,” says Gene Turner.

He suspects that New Zealand is probably behind the times, but that is partially due to the size of the market here. More competitive markets in the UK, United States and Australia are always looking for better ways of working. Clients too are demanding it – and they should be.

“If clients knew how lawyers worked they might be upset that they are paying so much per hour with the very manual bespoke processes that lawyers currently have. People tend to only go to lawyers when they absolutely have to, so there is scope for some law firms to do things better – compete a bit more and let it be known that they work differently for better value.”

“It’s estimated that 85% of people with a legal problem don’t go to see a lawyer,” he says. “Technology means that lawyers can price things at a lower point and make more money. There won’t be less legal work, but it might be done by different people.”

Technology will enable people to work more efficiently and more accurately. While the technology is not perfect, it can certainly make lawyers a lot more effective. “You will have time to think about and customise what you are providing for your client.”

But are lawyers who use the technology charging less?

Not necessarily, but in some areas of work they aren’t getting the full hours spent on work anyway, so the software can help offset this lost income.

“One of our clients tells us they save at least 8-10 hours per job. In many cases, a $5,000 job can take $7,000 worth of time, but the law firm only charges $5,000. Saving 10 hours can help avoid those write-offs. It also gives certainty of fees. If lawyers can guarantee a fixed fee of $5,000, that work will be of really high quality, and be delivered in a day – then there is value in that,” Mr Turner says.

“An estimated fee does work in favour of those who might want to work a bit more slowly, but only while clients accept an estimate and nobody else is offering a fixed fee alternative.”

Gene Turner believes the use of technology might enable firms to get away from the hourly rate. The need would then be to work out the value of the job, rather than the hourly rate. A job that once took eight hours may, with technology, only take half an hour, but it would still have more value than a half hour hourly rate. “The conversation will shift to working out a fixed fee that is good for everyone.”

While there is increasing interest in technology, people are struggling with how to buy it and why. There is a lack of confidence and a lack of knowledge.

“With so many options a lot of lawyers are stuck, waiting for the perfect solution and scared of making a mistake – or concerned that a better solution might be around the corner,” he says. “However, I would advise to take the improvement that is available now and if something better comes up in a year, it’s not that hard to change. Whatever the technology, a lot of solutions are now cloud-based that can be used on live transactions within weeks, with minimal investment.”

He adds that by freeing themselves up with technology, lawyers will have more time for other things. “Take that first step.”

As far as any lingering concerns about security and risk, Mr Turner says the systems are secure and probably better than the systems people are using now.

The future of tech

There is more interest in technology now, but there is a lack of linkage of the technology to the business strategy, which seems to be especially true of law firms. Automation of easy tasks is a given, but clients will just as easily do that themselves. The rise of in-house legal operations is a major risk to law firms.

“Thinking further ahead, what are law firms going to do that their clients won’t be able to do themselves and how can marrying that technology with their distinctive expertise and ways of working help with that?”

Gene Turner says there are also many new technology providers emerging across a range of different areas, which is exciting for a firm like LawHawk that specialises in using technology to create great legal outcomes beyond just document creation. It creates potential for other things that can be done with customers. For example, there has been a lot of improvements to tools that LawHawk’s customers already use such as Office 365 – which creates new opportunities to do a lot on a lower budget.